Located on the first floor at Orange Plaza in Marine City, Sigolhanu and Sigoldwaeji is a must — especially for lovers of pork.

When dinner time is near, groups of people descend on this restaurant and settle around the round tables, the ones typically found in old-fashioned Korean meat restaurants. It gets really busy and the delicious smells of meat permeate throughout the streets, and then you may not be able to resist soju.

We started with Jeju Daepae, a shaved Jeju version of samgyeopsal which was cooked by the helpful staff. The fully cooked pork belly with kimchi combined great together, and the meat is a slightly thicker texture than the slim samgyeopsal most people are accustomed to.

Our next order was Kkotgogi Hanpan. I think they call it Kkotgogi (kkot means flower and gogi means meat in Korean) since it looks like it is blooming when it is cooked. The preparation of the light slices of meat starts after your order and it will be pre-cooked before it is served on your table.

The Jeju Daepae was great, but the Kkotgogi was much better. The well-cooked, thicker meat was tender and juicy, and it was great with the accompanying sauce that was served alongside it. We also tried their noodles and we were not disappointed. Many regulars swear by their old Korean-style deonjang jjigae for 5,000 won and kimchi jjigae for 8,000 won — a definite must-order on any visit. 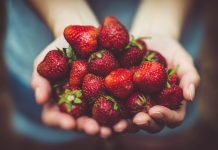